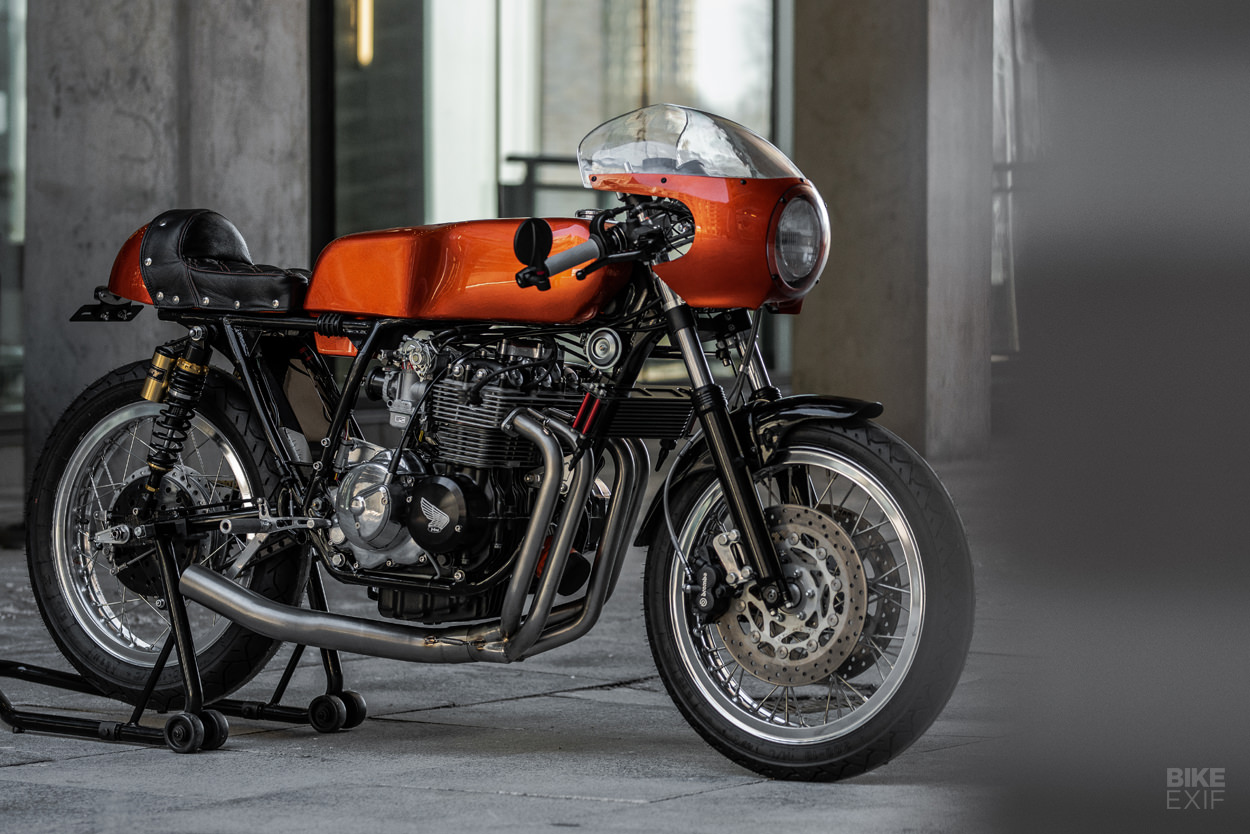 It’s a long time since we’ve featured what you might call a ‘traditional’ café racer. The term is used very loosely these days—we’re as guilty as anyone—and it’s easy to forget how far we’ve moved on from the classic style.

So this Kandy-Kolored tangerine-flake streamliner is a good reminder of ground zero. It comes from Kemp Archibald of Toronto’s Ripple Rocker Racers, and it’s been gracing the window of the local Town Moto store since March. 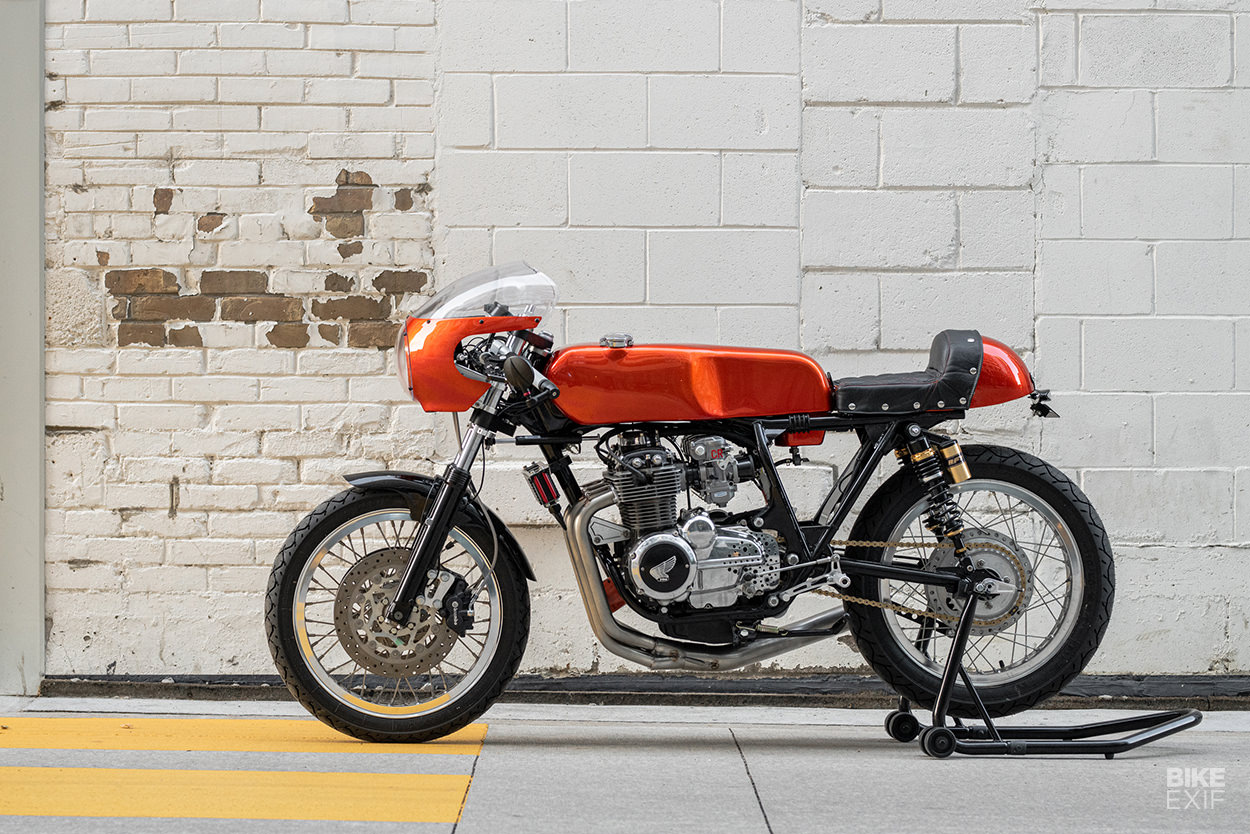 The guys at Ripple Rocker Racers make custom parts for café racer builds, but also use their know-how and machinery to build bikes for their customers. Occasionally, they’ll build a bike for themselves.

“I started this one ten years ago,” says co-founder Kemp. “I gathered parts to create an homage to Kaz Yoshima and his CB400F—which roamed the streets and racetracks of southern California back in the mid 70s.” 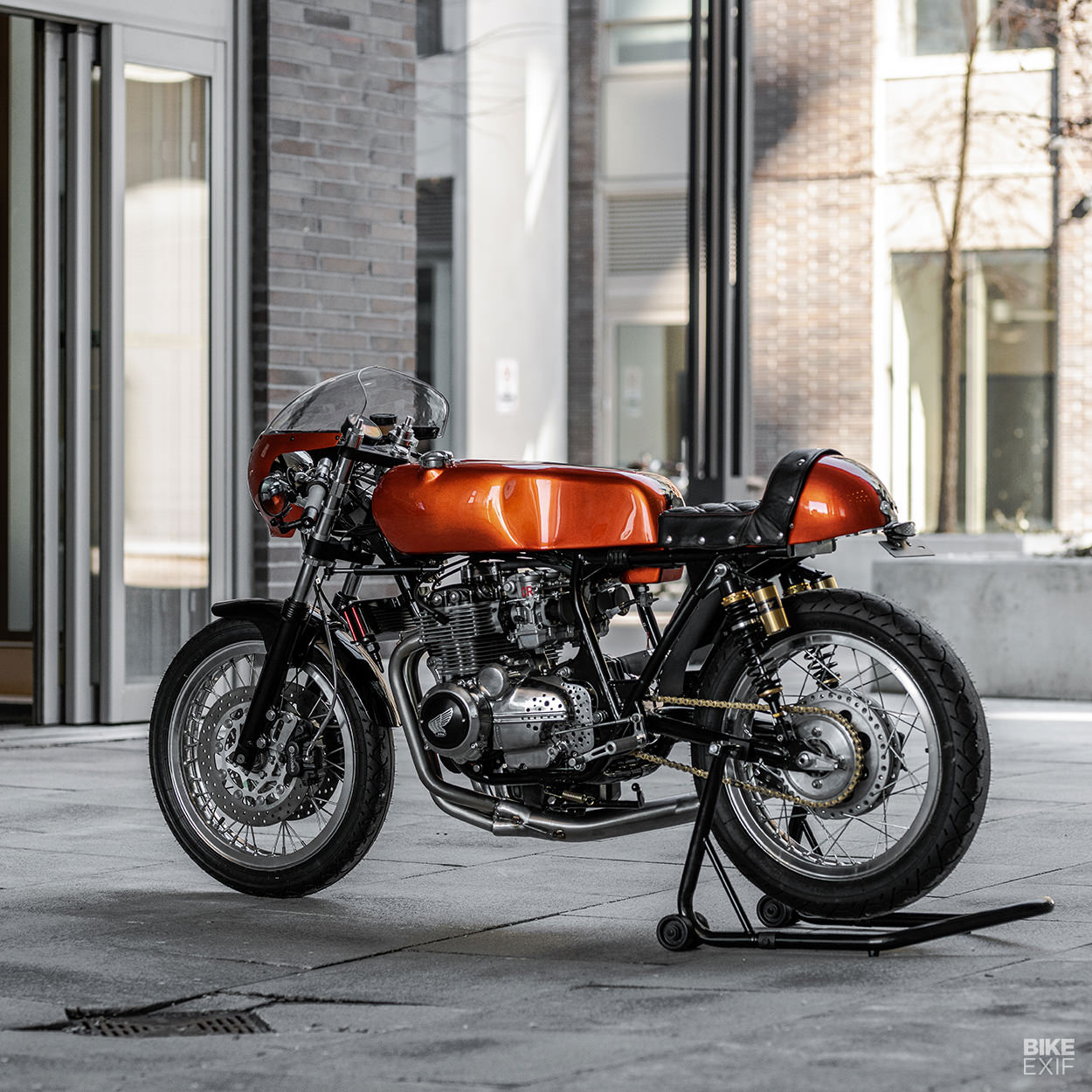 “The idea of the little guy beating Goliath has always appealed to me. A Honda CB400F that could slay a Kawasaki Z1, like Yoshima’s did…that was my build plan. But customer builds meant it was constantly relegated to the back of the garage till this past winter, when things finally came together.”

The build began with a 1973 CB350F frame, which was reinforced to handle the additional load and forces generated by a bigger engine and more powerful brakes. “We manufactured our own billet triple trees—with our partner Mechetronics Specialty Services—so we could adapt the 35mm forks from a 1980 CB750F,” says Kemp. 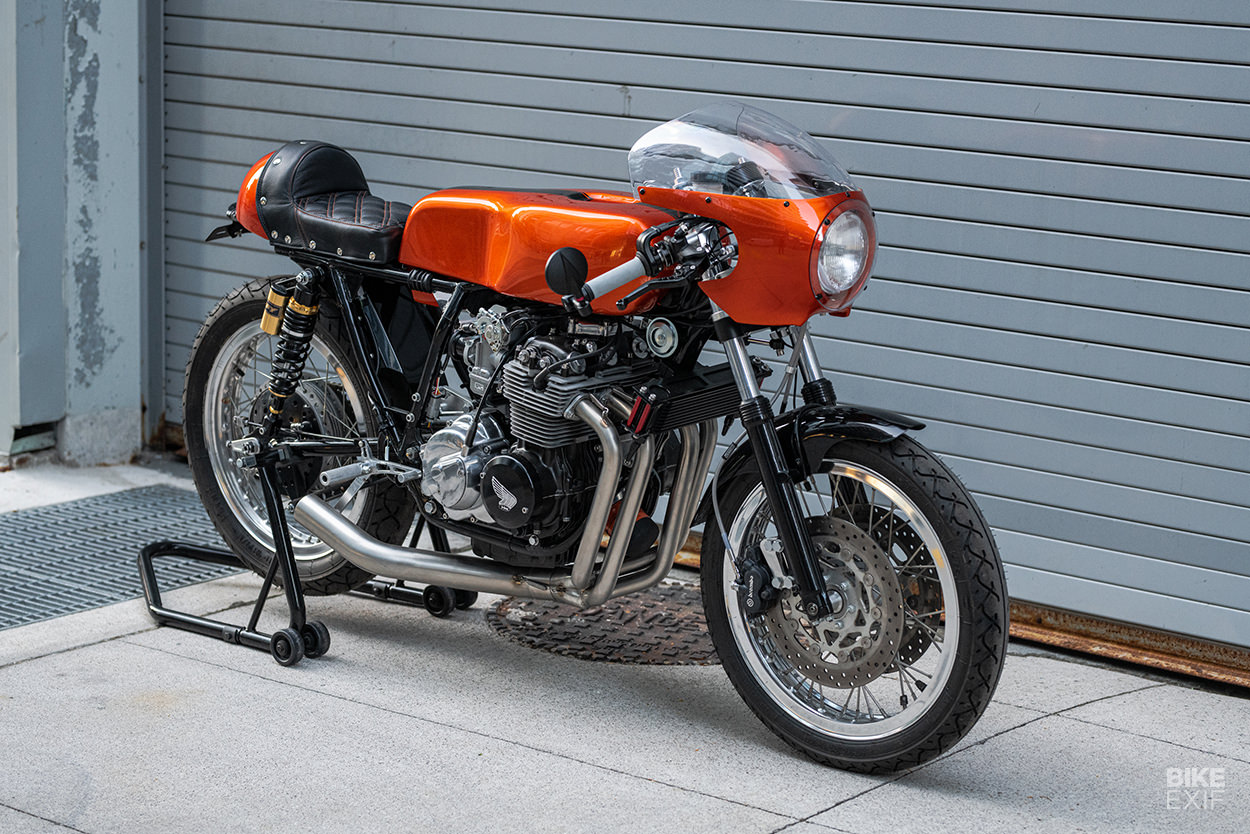 The front wheel is a CB750 hub, with Buchanan spokes laced to a D.I.D. shouldered aluminum rim. Adapter plates were machined up, to mount FZ600 rotors to the CB750 front hub. 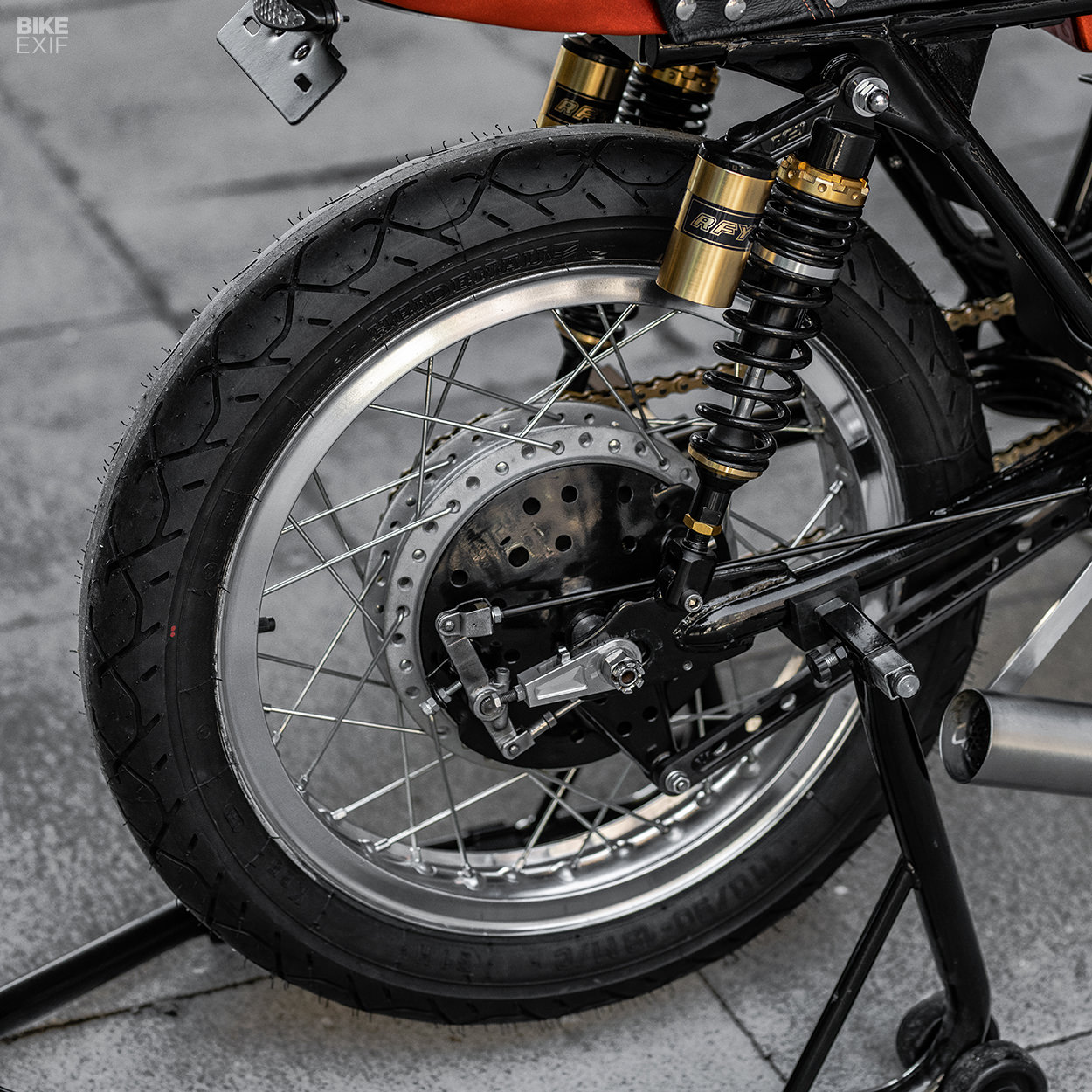 The engine was sourced from a CB400F, but it’s not the mild-manner inline four that left the factory. The cylinder castings have been bored out to accept CB500 sleeves, and CBR125 high compression pistons give a displacement of almost 500cc and a compression ratio of 12:1. 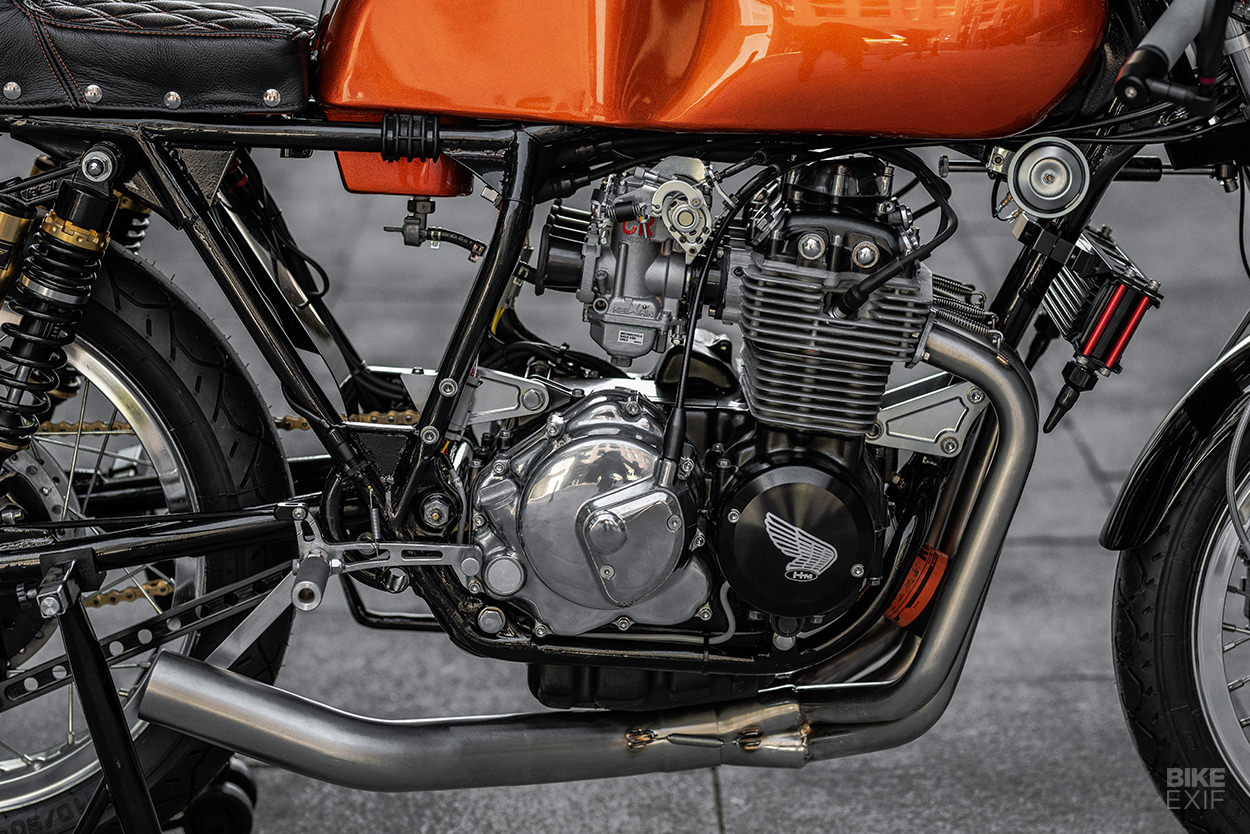 The intakes have been bored too, and are matched to 26mm Keihin CR Carbs and 1 mm oversize valves and springs from Kibblewhite, plus titanium retainers. A Web Cam 63B hot cam with a Yoshimura HD cam chain and a TT400 slipper guide and adjuster were added.

Kemp then gutted the oil pump and installed rotors from a CB750, machined to fit. This mod doubles the oil pressure delivered to the custom-built Carrillo rods, which are fitted to a lightened and balanced crank. It’s a very trick (but also proven) setup, created with help from the engine gurus at Gord Bush Performance. A Dyna ignition, coils and wires keep the electrics in check. 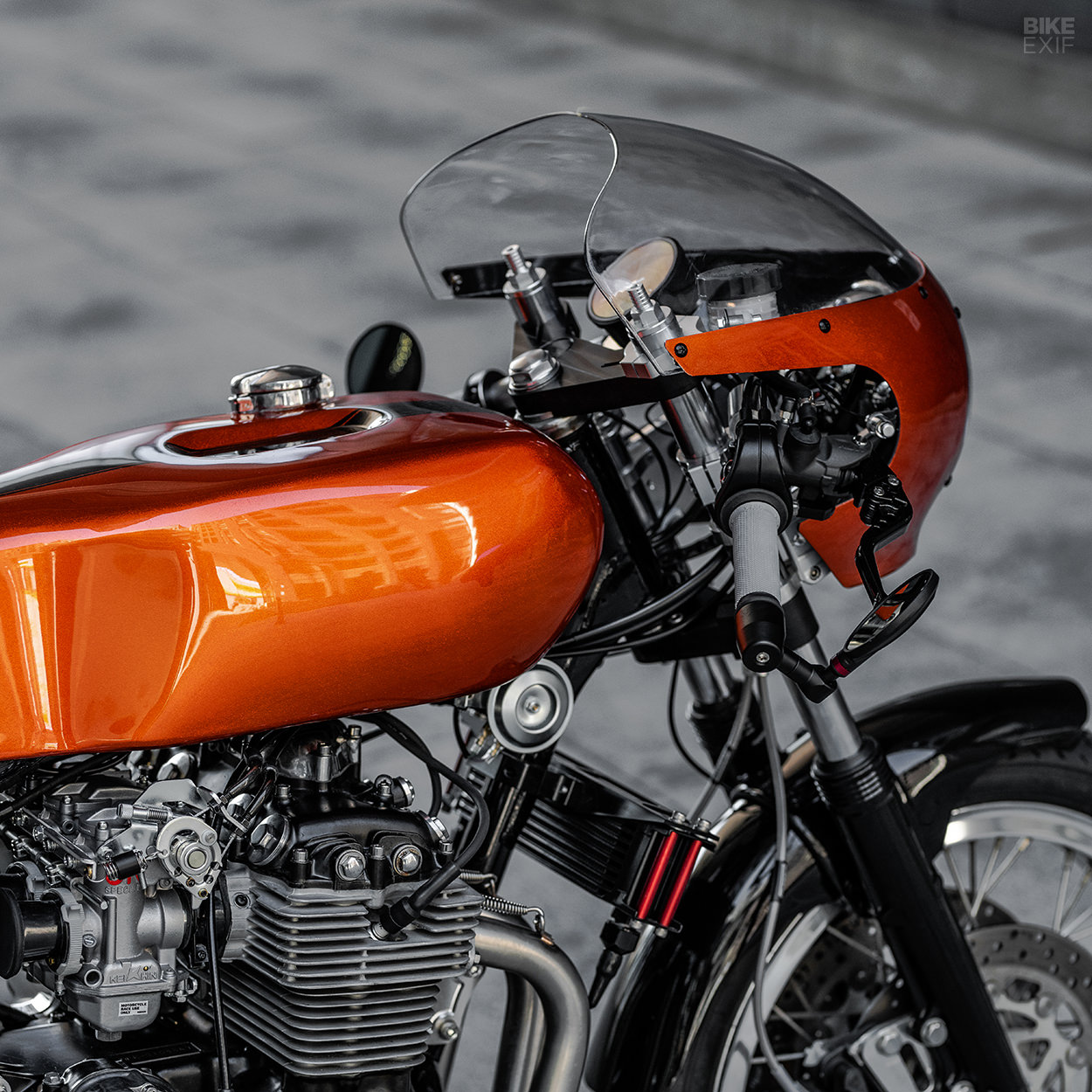 To leverage the newfound power, Kemp has kept the bodywork as light as possible: he’s used an aluminum road race tank and seat, originally designed for the CB350F by Halcott in England many decades ago. 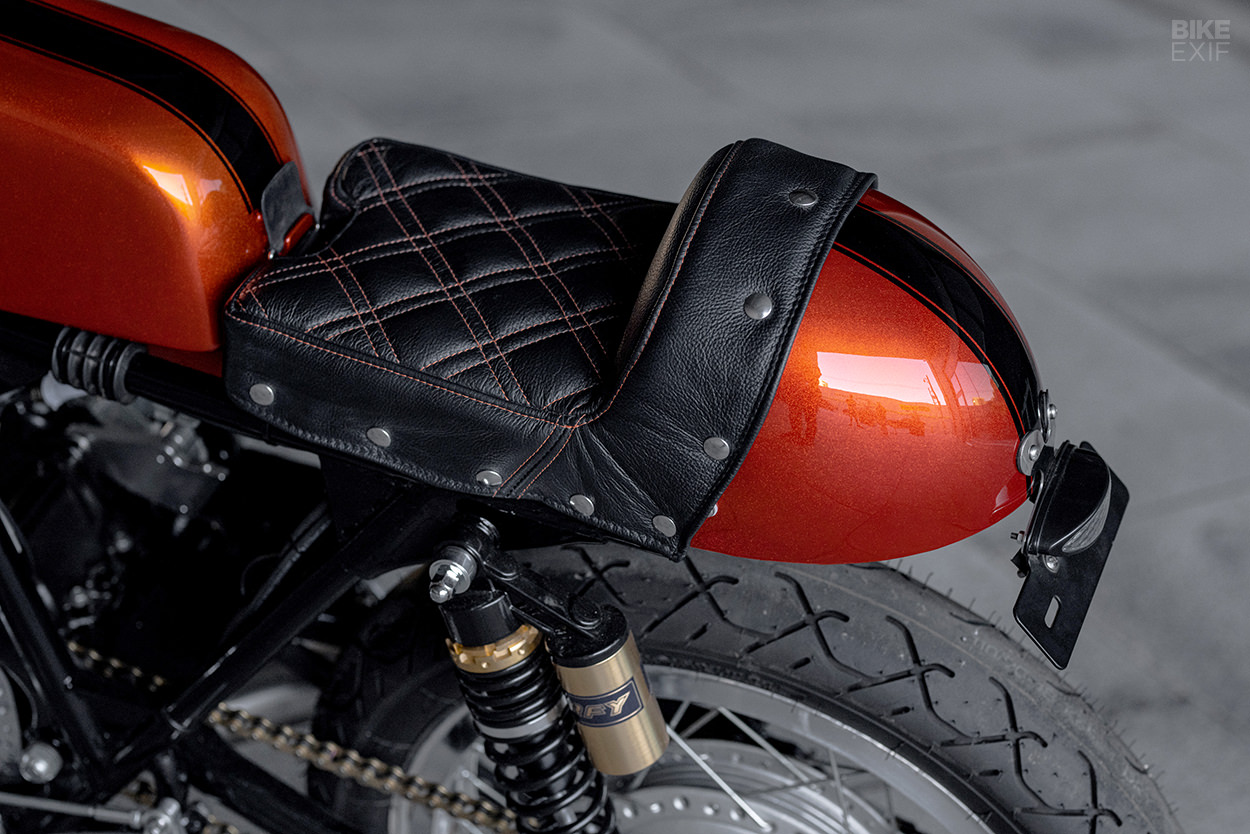 “We made a custom electronics box and hid the Antigravity battery and Ricks rectifier/regulator under the seat,” he says. “We also went a little crazy with Motogadget parts, and sourced an m.unit Blue and a Chronoclassic 14,000 RPM analog tachometer, now in our custom billet mount.

Kemp has also sunk a RFID ignition lock into the billet top triple, and installed m.blaze turn signal, and an inductive proximity speedo sensor. The Honda’s new wiring system has all circuits on relays and uses waterproof ‘Deutsch’ connecters for the ultimate in reliability. 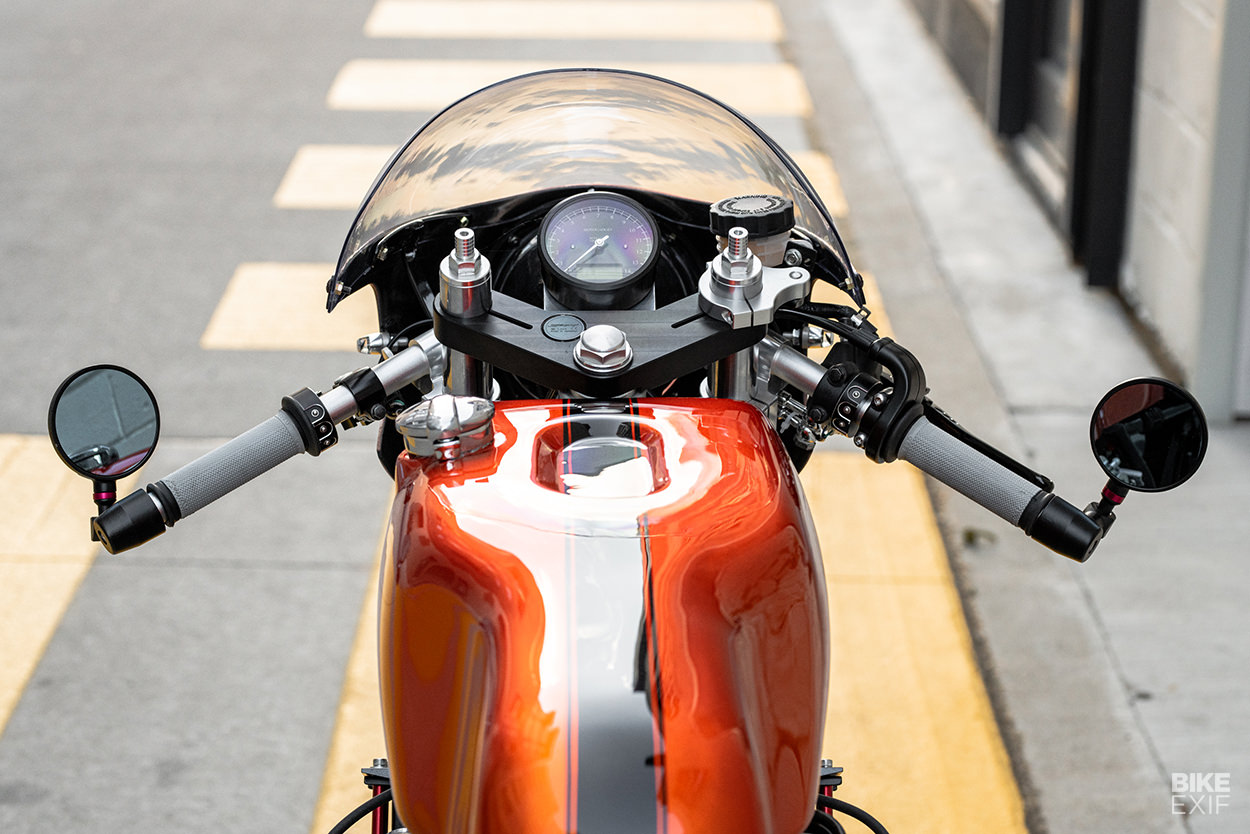 The brake master is a late model GSX-R750 item plumbed into Russell braided lines, and the tiny chrome headlight is from Bates and fitted with a LED bulb. Mechetronics helped again with custom billet aluminum headlight and fairing mounts.

There’s a vintage ‘ready to race’ vibe about this machine, but Kemp has yet to ride it in anger. “I have run the little beast in the garage, and the sound from the Yoshima pipe is awesome. We expect to see about 65hp at the rear wheel.” 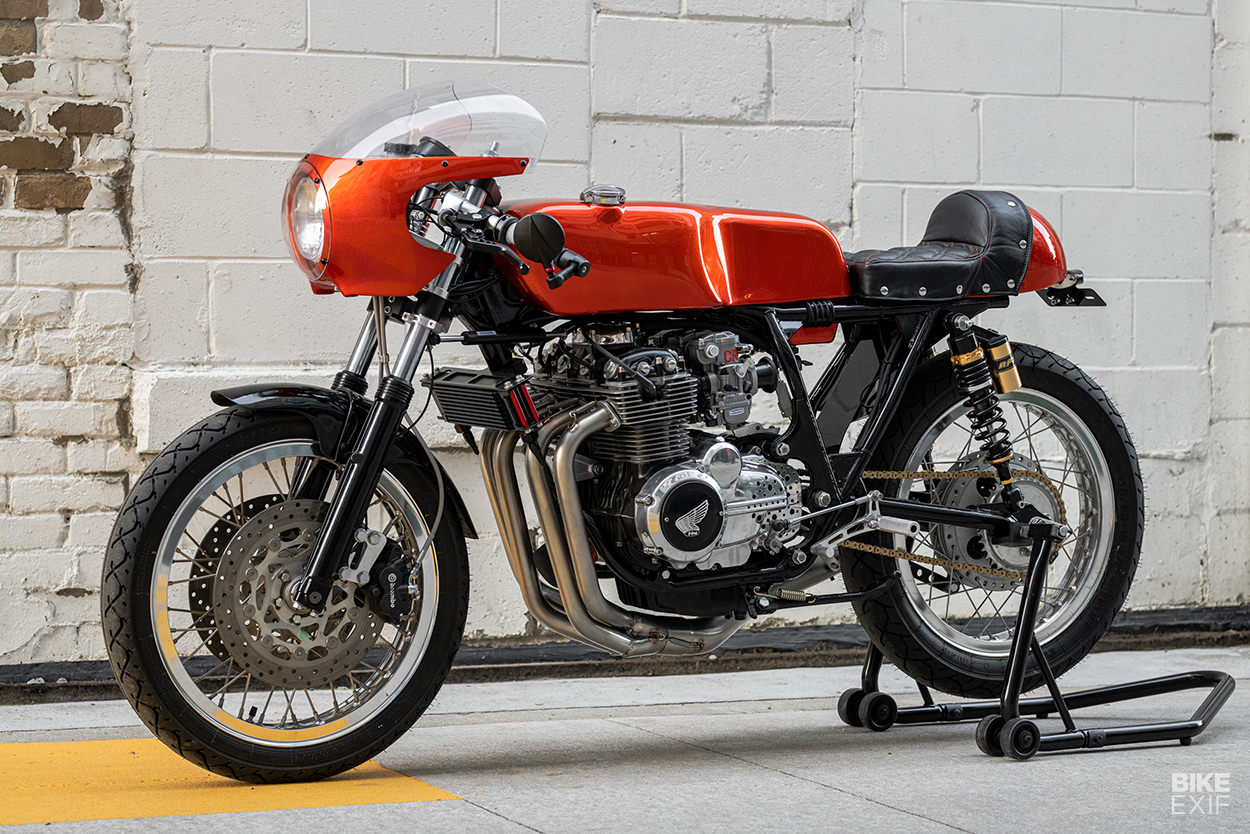 He’s called this Honda ‘The Raptor,’ because “It’s little, fast and aggressive. A predator with a small footprint, designed to destroy much bigger prey on the roads and tracks of southern Ontario. We are absolutely frantic to get the beast out and on the hunt!”

The lockdown is bad news for Kemp, but not so bad for moto fans in the Toronto area. Pop over to Town Moto to get a closer look, because time is running out for classy old school builds like these. 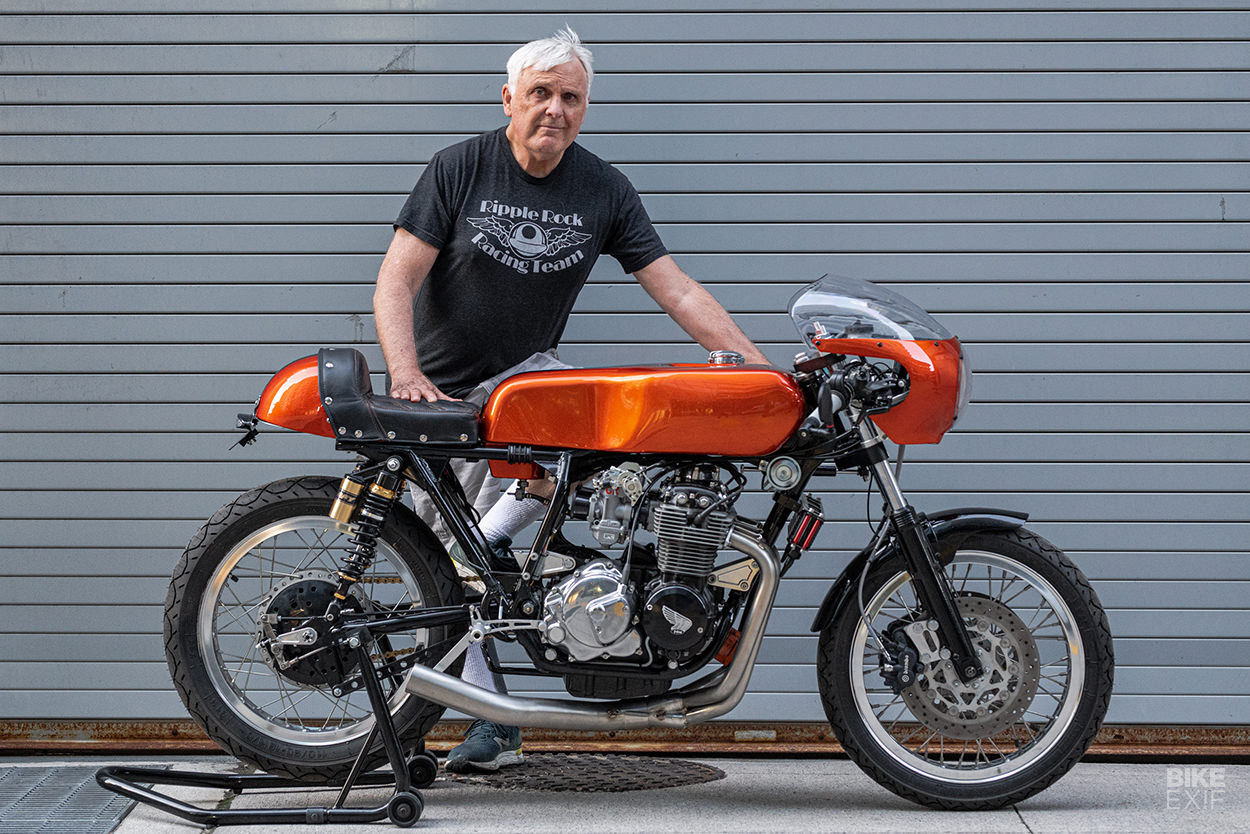